MGM Resorts International (NYSE:MGM) has earned an average rating of “Hold” from the fifteen analysts that are currently covering the firm, Marketbeat.com reports. One research analyst has rated the stock with a sell rating, eight have assigned a hold rating and four have issued a buy rating on the company. The average 12-month target price among analysts that have covered the stock in the last year is $31.90.

The company also recently disclosed a quarterly dividend, which will be paid on Monday, December 16th. Stockholders of record on Tuesday, December 10th will be issued a dividend of $0.13 per share. The ex-dividend date is Monday, December 9th. This represents a $0.52 annualized dividend and a dividend yield of 1.62%. MGM Resorts International’s dividend payout ratio (DPR) is 52.53%.

In other news, Director Rose Mckinney-James sold 2,670 shares of the business’s stock in a transaction dated Tuesday, September 10th. The shares were sold at an average price of $28.15, for a total value of $75,160.50. Following the sale, the director now directly owns 4,616 shares in the company, valued at approximately $129,940.40. The transaction was disclosed in a legal filing with the SEC, which is accessible through this link. Also, Director Keith A. Meister bought 79,000 shares of the firm’s stock in a transaction dated Monday, November 4th. The shares were acquired at an average price of $29.43 per share, for a total transaction of $2,324,970.00. The disclosure for this purchase can be found here. 3.47% of the stock is owned by corporate insiders.

Featured Article: What is a Lock-Up Period? 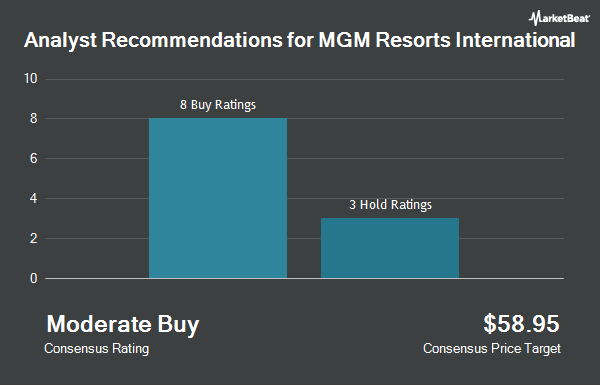