Point72 Hong Kong Ltd increased its position in shares of Chemed Co. (NYSE:CHE) by 119.2% during the fourth quarter, according to the company in its most recent disclosure with the Securities and Exchange Commission. The fund owned 686 shares of the company’s stock after buying an additional 373 shares during the period. Point72 Hong Kong Ltd’s holdings in Chemed were worth $301,000 as of its most recent filing with the Securities and Exchange Commission.

Chemed (NYSE:CHE) last announced its earnings results on Tuesday, February 18th. The company reported $4.22 earnings per share (EPS) for the quarter, beating the Zacks’ consensus estimate of $4.09 by $0.13. The company had revenue of $522.30 million during the quarter, compared to analysts’ expectations of $524.20 million. Chemed had a net margin of 11.35% and a return on equity of 35.38%. Chemed’s quarterly revenue was up 14.2% on a year-over-year basis. During the same quarter in the previous year, the business posted $3.35 earnings per share. Equities analysts predict that Chemed Co. will post 16.34 earnings per share for the current year.

The firm also recently announced a quarterly dividend, which was paid on Monday, March 23rd. Stockholders of record on Monday, March 2nd were given a $0.32 dividend. The ex-dividend date of this dividend was Friday, February 28th. This represents a $1.28 dividend on an annualized basis and a dividend yield of 0.34%. Chemed’s payout ratio is presently 9.18%.

Several research firms have commented on CHE. ValuEngine upgraded shares of Chemed from a “sell” rating to a “hold” rating in a report on Tuesday, March 3rd. Oppenheimer boosted their target price on shares of Chemed from $525.00 to $535.00 and gave the company an “outperform” rating in a research report on Wednesday, February 19th. Finally, Royal Bank of Canada raised shares of Chemed from a “sector perform” rating to an “outperform” rating and boosted their target price for the company from $448.00 to $535.00 in a research report on Tuesday, March 10th. One research analyst has rated the stock with a sell rating, one has issued a hold rating and four have given a buy rating to the company’s stock. Chemed currently has an average rating of “Buy” and an average price target of $515.00.

Chemed Corporation provides hospice and palliative care services to patients through a network of physicians, registered nurses, home health aides, social workers, clergy, and volunteers in the United States. It operates through two segments, VITAS and Roto-Rooter. The company also offers plumbing, drain cleaning, water restoration, and other related services to residential and commercial customers through company-owned and independent contractors, and franchised locations.

Want to see what other hedge funds are holding CHE? Visit HoldingsChannel.com to get the latest 13F filings and insider trades for Chemed Co. (NYSE:CHE). 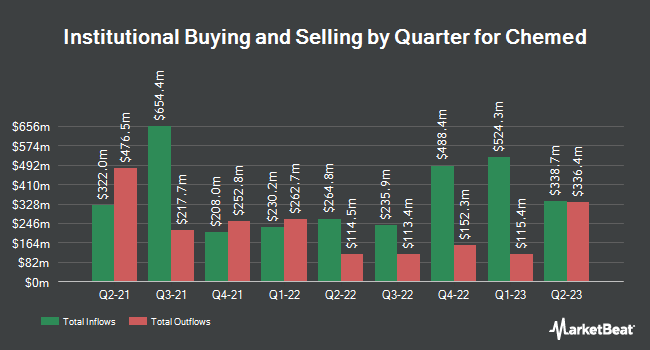 Receive News & Ratings for Chemed Daily - Enter your email address below to receive a concise daily summary of the latest news and analysts' ratings for Chemed and related companies with MarketBeat.com's FREE daily email newsletter.