Skandinaviska Enskilda Banken AB publ purchased a new stake in Party City Holdco Inc (NYSE:PRTY) in the fourth quarter, according to its most recent disclosure with the Securities & Exchange Commission. The institutional investor purchased 513,613 shares of the specialty retailer’s stock, valued at approximately $1,202,000. Skandinaviska Enskilda Banken AB publ owned approximately 0.54% of Party City Holdco as of its most recent SEC filing.

Party City Holdco (NYSE:PRTY) last released its quarterly earnings data on Thursday, March 12th. The specialty retailer reported $0.51 earnings per share (EPS) for the quarter, missing the Thomson Reuters’ consensus estimate of $0.88 by ($0.37). Party City Holdco had a positive return on equity of 5.03% and a negative net margin of 22.67%. The business had revenue of $731.55 million during the quarter, compared to analysts’ expectations of $751.80 million. As a group, analysts predict that Party City Holdco Inc will post 0.68 EPS for the current fiscal year.

In other news, major shareholder Clifford Sosin purchased 644,492 shares of the company’s stock in a transaction dated Tuesday, March 17th. The stock was acquired at an average price of $0.48 per share, for a total transaction of $309,356.16. The acquisition was disclosed in a document filed with the Securities & Exchange Commission, which can be accessed through this link. Company insiders own 6.47% of the company’s stock.

Party City Holdco Inc, through its subsidiaries, designs, manufactures, sources, and distributes party supplies in the United States and internationally. The company operates in two segments, Retail and Wholesale. It offers paper and plastic tableware, metallic and latex balloons, Halloween and other costumes, accessories, novelties, gifts, and stationery.

Featured Article: What is the FTSE 100 index? 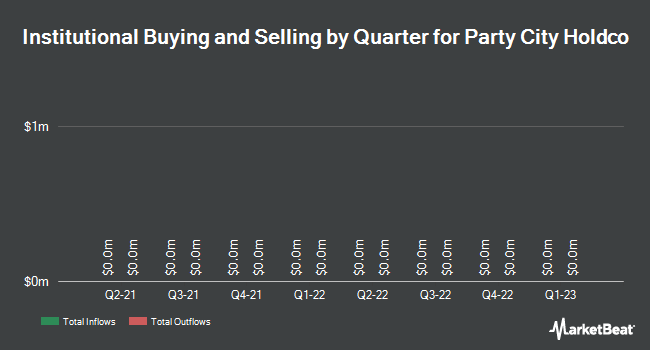