Analysts expect Amc Networks Inc (NASDAQ:AMCX) to announce earnings per share (EPS) of $1.19 for the current fiscal quarter, according to Zacks Investment Research. Two analysts have issued estimates for Amc Networks’ earnings, with estimates ranging from $1.12 to $1.28. Amc Networks posted earnings per share of $2.60 during the same quarter last year, which would indicate a negative year over year growth rate of 54.2%. The firm is expected to report its next quarterly earnings report on Wednesday, July 29th.

On average, analysts expect that Amc Networks will report full year earnings of $5.41 per share for the current fiscal year, with EPS estimates ranging from $4.97 to $5.71. For the next fiscal year, analysts forecast that the firm will report earnings of $6.12 per share, with EPS estimates ranging from $5.94 to $6.36. Zacks’ EPS averages are a mean average based on a survey of sell-side research firms that cover Amc Networks.

Amc Networks (NASDAQ:AMCX) last issued its earnings results on Tuesday, May 5th. The company reported $1.47 earnings per share for the quarter, missing analysts’ consensus estimates of $2.07 by ($0.60). The firm had revenue of $734.40 million for the quarter, compared to analyst estimates of $736.27 million. Amc Networks had a return on equity of 71.92% and a net margin of 10.16%. Amc Networks’s revenue for the quarter was down 6.4% compared to the same quarter last year. During the same period in the previous year, the company earned $2.64 earnings per share.

AMC Networks Inc owns and operates various cable television's brands delivering content to audiences, and a platform to distributors and advertisers in the United States and internationally. The company operates in two segments, National Networks; and International and Other. The National Networks segment operates five distributed entertainment programming networks under the AMC, WE tv, BBC AMERICA, IFC, and SundanceTV names in high definition and standard definition formats. 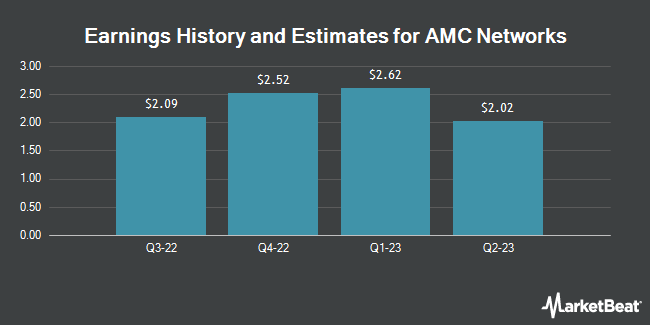 $0.79 Earnings Per Share Expected for Medtronic PLC This Quarter