Tredje AP fonden raised its stake in Johnson Outdoors Inc. (NASDAQ:JOUT) by 19.7% during the first quarter, according to the company in its most recent Form 13F filing with the Securities & Exchange Commission. The fund owned 58,031 shares of the company’s stock after acquiring an additional 9,558 shares during the quarter. Tredje AP fonden owned approximately 0.58% of Johnson Outdoors worth $1,565,000 as of its most recent filing with the Securities & Exchange Commission.

Johnson Outdoors (NASDAQ:JOUT) last announced its earnings results on Tuesday, May 5th. The company reported $2.02 EPS for the quarter, topping the Zacks’ consensus estimate of $1.60 by $0.42. The business had revenue of $163.08 million during the quarter, compared to the consensus estimate of $180.46 million. Johnson Outdoors had a net margin of 9.24% and a return on equity of 15.94%.

The company also recently announced a quarterly dividend, which will be paid on Thursday, July 23rd. Shareholders of record on Thursday, July 9th will be issued a $0.17 dividend. The ex-dividend date of this dividend is Wednesday, July 8th. This represents a $0.68 dividend on an annualized basis and a yield of 0.78%. Johnson Outdoors’s dividend payout ratio is presently 13.31%.

Further Reading: Why is cost of goods sold important? 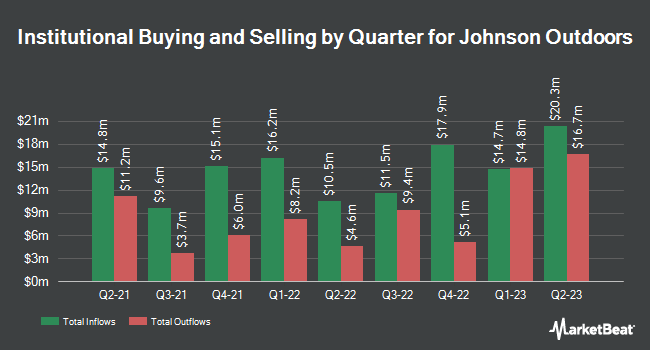