$37.58 Million in Sales Expected for HBT Financial (NASDAQ:HBT) This Quarter

Wall Street brokerages predict that HBT Financial (NASDAQ:HBT) will announce sales of $37.58 million for the current quarter, according to Zacks Investment Research. Four analysts have issued estimates for HBT Financial’s earnings, with estimates ranging from $36.30 million to $38.30 million. The business is expected to report its next quarterly earnings results on Thursday, July 30th.

According to Zacks, analysts expect that HBT Financial will report full year sales of $153.80 million for the current fiscal year, with estimates ranging from $152.90 million to $154.50 million. For the next fiscal year, analysts expect that the company will post sales of $148.17 million, with estimates ranging from $144.20 million to $150.66 million. Zacks’ sales averages are an average based on a survey of research firms that cover HBT Financial.

HBT Financial (NASDAQ:HBT) last announced its quarterly earnings results on Thursday, April 30th. The company reported $0.30 earnings per share (EPS) for the quarter, missing analysts’ consensus estimates of $0.40 by ($0.10). The firm had revenue of $35.91 million for the quarter, compared to analysts’ expectations of $38.90 million.

HBT Financial, Inc operates as the bank holding company for Heartland Bank and Lincoln Bank that provides business, commercial, and retail banking products and services to businesses, families, and local governments throughout Central and Northeastern Illinois. The company offers checking, saving, and retirement accounts, as well as demand and time deposits.

Read More: Technical Indicators – What is a Golden Cross? 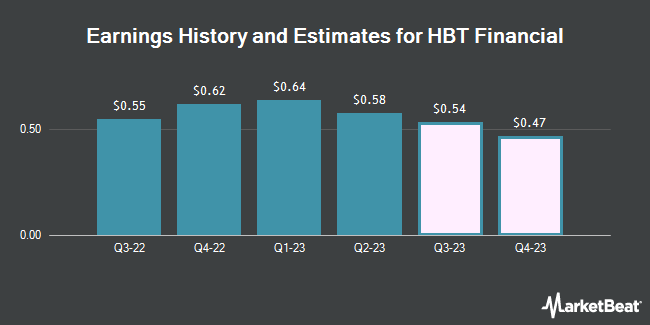