Wall Street brokerages forecast that PlayAGS Inc (NYSE:AGS) will post sales of $9.22 million for the current quarter, Zacks reports. Six analysts have provided estimates for PlayAGS’s earnings, with the lowest sales estimate coming in at $4.00 million and the highest estimate coming in at $12.83 million. PlayAGS reported sales of $74.51 million during the same quarter last year, which indicates a negative year over year growth rate of 87.6%. The firm is scheduled to report its next earnings results on Wednesday, August 5th.

According to Zacks, analysts expect that PlayAGS will report full year sales of $134.09 million for the current financial year, with estimates ranging from $112.70 million to $159.70 million. For the next financial year, analysts expect that the firm will report sales of $223.64 million, with estimates ranging from $203.50 million to $252.30 million. Zacks’ sales calculations are an average based on a survey of sell-side analysts that that provide coverage for PlayAGS.

PlayAGS (NYSE:AGS) last released its quarterly earnings results on Thursday, May 7th. The company reported ($0.41) earnings per share for the quarter, missing analysts’ consensus estimates of ($0.08) by ($0.33). PlayAGS had a negative net margin of 9.12% and a negative return on equity of 16.81%. The firm had revenue of $54.31 million during the quarter, compared to the consensus estimate of $69.97 million.

AGS is a global company focused on creating a diverse mix of entertaining gaming experiences for every kind of player. Their roots are firmly planted in the Class II Native American gaming market, but their customer-centric culture and growth have helped them branch out to become a leading all-inclusive commercial gaming supplier.

Featured Story: Stock Market – What is a circuit breaker? 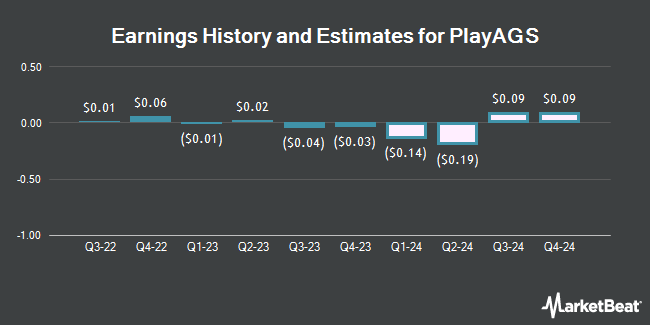 Receive News & Ratings for PlayAGS Daily - Enter your email address below to receive a concise daily summary of the latest news and analysts' ratings for PlayAGS and related companies with MarketBeat.com's FREE daily email newsletter.