Wall Street analysts expect Oasis Petroleum Inc. (NYSE:OAS) to announce $245.70 million in sales for the current quarter, according to Zacks Investment Research. Five analysts have provided estimates for Oasis Petroleum’s earnings, with estimates ranging from $221.00 million to $262.00 million. Oasis Petroleum reported sales of $529.41 million during the same quarter last year, which indicates a negative year over year growth rate of 53.6%. The firm is scheduled to announce its next quarterly earnings results on Tuesday, August 4th.

On average, analysts expect that Oasis Petroleum will report full-year sales of $1.27 billion for the current fiscal year, with estimates ranging from $1.09 billion to $1.76 billion. For the next financial year, analysts forecast that the business will report sales of $1.04 billion, with estimates ranging from $757.00 million to $1.63 billion. Zacks Investment Research’s sales calculations are an average based on a survey of research firms that that provide coverage for Oasis Petroleum.

Oasis Petroleum (NYSE:OAS) last released its earnings results on Monday, May 18th. The energy producer reported ($0.20) earnings per share (EPS) for the quarter, missing the Zacks’ consensus estimate of ($0.17) by ($0.03). The company had revenue of $387.80 million during the quarter. Oasis Petroleum had a net margin of 7.78% and a negative return on equity of 0.50%.

Oasis Petroleum Inc, an independent exploration and production company, focuses on the acquisition and development of onshore unconventional oil and natural gas resources in the North Dakota and Montana regions of the Williston Basin and the Texas region of the Delaware Basin, respectively. As of December 31, 2018, the company had 413,552 net leasehold acres in the Williston Basin; and 23,366 net leasehold acres in the Delaware Basin, as well as approximately 320.5 million barrels of oil equivalent of estimated net proved reserves.

Recommended Story: Market Timing – The Benefits and the Danger 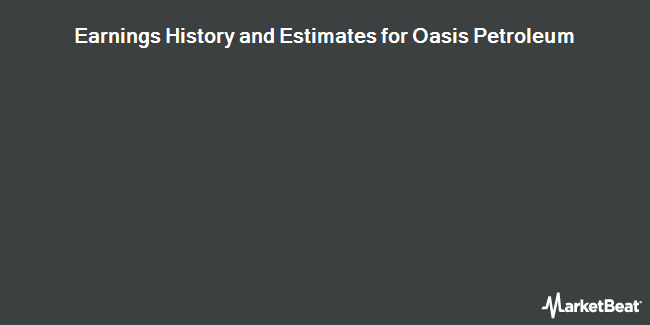