Armstrong World Industries (NYSE:AWI) announced its earnings results on Tuesday. The construction company reported $0.75 earnings per share (EPS) for the quarter, missing the Zacks’ consensus estimate of $0.91 by ($0.16), MarketWatch Earnings reports. The business had revenue of $202.50 million during the quarter, compared to the consensus estimate of $221.05 million. Armstrong World Industries had a negative net margin of 5.64% and a positive return on equity of 56.59%. The company’s revenue was down 25.6% compared to the same quarter last year. During the same period in the previous year, the firm posted $1.27 EPS. Armstrong World Industries updated its FY 2020
Pre-Market guidance to EPS.

The business also recently announced a quarterly dividend, which will be paid on Thursday, August 20th. Investors of record on Thursday, August 6th will be issued a $0.20 dividend. This represents a $0.80 annualized dividend and a yield of 1.13%. The ex-dividend date is Wednesday, August 5th. Armstrong World Industries’s payout ratio is presently 16.74%.

Armstrong World Industries, Inc designs, manufactures, and sells ceiling systems primarily for use in the construction and renovation of residential and commercial buildings in the United States, Canada, and Latin America. The company operates through Mineral Fiber and Architectural Specialties segments. 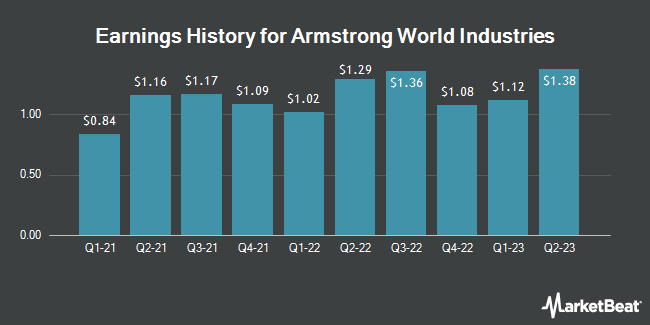