Coeur Mining (NYSE:CDE) posted its quarterly earnings data on Wednesday. The basic materials company reported $0.01 earnings per share for the quarter, topping the consensus estimate of ($0.04) by $0.05, MarketWatch Earnings reports. The company had revenue of $154.20 million during the quarter, compared to analysts’ expectations of $151.99 million. Coeur Mining had a negative return on equity of 0.90% and a negative net margin of 41.33%. Coeur Mining’s revenue for the quarter was down 4.9% compared to the same quarter last year. During the same period in the prior year, the firm earned ($0.11) earnings per share.

In other Coeur Mining news, SVP Casey M. Nault sold 30,000 shares of the company’s stock in a transaction that occurred on Monday, July 27th. The stock was sold at an average price of $8.01, for a total value of $240,300.00. The transaction was disclosed in a document filed with the SEC, which is accessible through this link. 1.60% of the stock is owned by corporate insiders.

Featured Story: What is the NASDAQ? 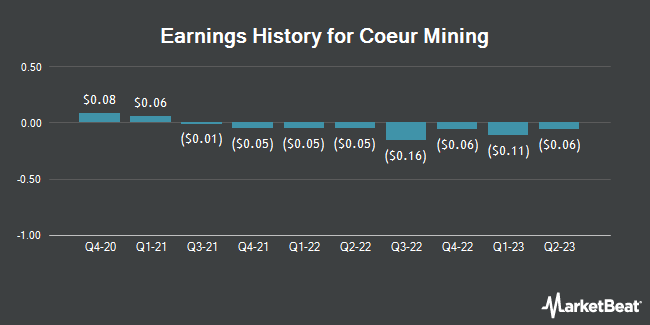 Caesars Entertainment Given Hold Rating at Bank of America

Shawcor Upgraded by Royal Bank of Canada to Outperform