IMPINJ (NASDAQ:PI) released its earnings results on Wednesday. The company reported ($0.25) earnings per share (EPS) for the quarter, beating the Zacks’ consensus estimate of ($0.49) by $0.24, MarketWatch Earnings reports. The company had revenue of $26.50 million for the quarter, compared to the consensus estimate of $26.80 million. IMPINJ had a negative net margin of 21.57% and a negative return on equity of 14.82%. IMPINJ’s quarterly revenue was down 30.3% compared to the same quarter last year. During the same quarter in the previous year, the company earned $0.03 EPS.

In other news, CEO Chris Ph.D. Diorio sold 6,073 shares of IMPINJ stock in a transaction dated Thursday, July 2nd. The stock was sold at an average price of $27.12, for a total value of $164,699.76. Following the completion of the transaction, the chief executive officer now owns 287,898 shares of the company’s stock, valued at approximately $7,807,793.76. The transaction was disclosed in a legal filing with the SEC, which is available through the SEC website. 25.70% of the stock is owned by insiders.

Further Reading: How a Strangle Strategy is different from a Straddle Strategy 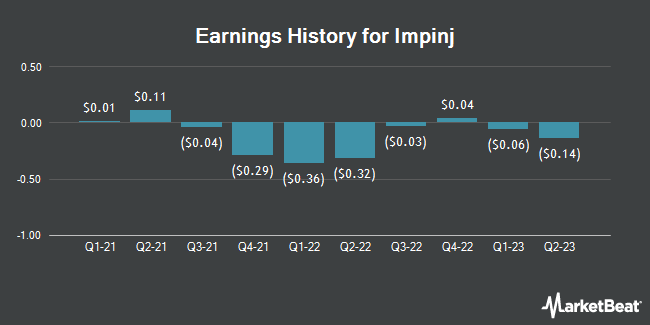 Receive News & Ratings for IMPINJ Daily - Enter your email address below to receive a concise daily summary of the latest news and analysts' ratings for IMPINJ and related companies with MarketBeat.com's FREE daily email newsletter.