Matador Resources (NYSE:MTDR) issued its quarterly earnings results on Tuesday. The energy company reported ($0.03) earnings per share for the quarter, beating the consensus estimate of ($0.17) by $0.14, MarketWatch Earnings reports. Matador Resources had a negative net margin of 15.93% and a positive return on equity of 5.30%. The business had revenue of $118.80 million for the quarter, compared to the consensus estimate of $171.79 million. During the same quarter in the previous year, the firm earned $0.30 earnings per share. The company’s revenue for the quarter was down 50.8% on a year-over-year basis.

In other news, COO Billy E. Goodwin acquired 5,000 shares of the business’s stock in a transaction on Monday, May 11th. The shares were acquired at an average price of $7.98 per share, for a total transaction of $39,900.00. The acquisition was disclosed in a legal filing with the Securities & Exchange Commission, which can be accessed through this hyperlink. Insiders own 7.40% of the company’s stock.

Matador Resources Company, an independent energy company, engages in the exploration, development, production, and acquisition of oil and natural gas resources in the United States. It operates in two segments, Exploration and Production; and Midstream. The company primarily holds interests in the Wolfcamp and Bone Spring plays in the Delaware Basin in Southeast New Mexico and West Texas. 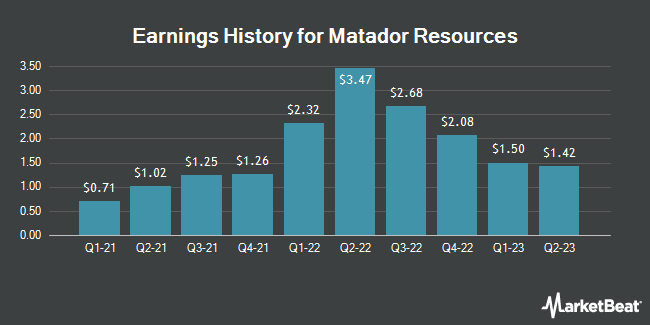 Zalando Given a €65.50 Price Target at Barclays

Evonik Industries Given a €23.00 Price Target at Nord/LB