August 2nd, 2020 - Comments Off on Akamai Technologies (NASDAQ:AKAM) Price Target Increased to $130.00 by Analysts at DA Davidson - Filed Under - by Mark James
Filed Under: Investment
Tweet

Akamai Technologies (NASDAQ:AKAM) had its price objective upped by DA Davidson from $115.00 to $130.00 in a report released on Wednesday morning, The Fly reports. DA Davidson currently has a buy rating on the technology infrastructure company’s stock.

Akamai Technologies (NASDAQ:AKAM) last issued its quarterly earnings results on Tuesday, July 28th. The technology infrastructure company reported $1.38 EPS for the quarter, topping analysts’ consensus estimates of $1.21 by $0.17. The business had revenue of $794.72 million during the quarter, compared to the consensus estimate of $767.38 million. Akamai Technologies had a net margin of 17.82% and a return on equity of 17.37%. The company’s quarterly revenue was up 12.7% compared to the same quarter last year. During the same period in the previous year, the firm posted $1.07 earnings per share. As a group, research analysts predict that Akamai Technologies will post 3.93 earnings per share for the current year.

Recommended Story: What are the economic characteristics of a bear market? 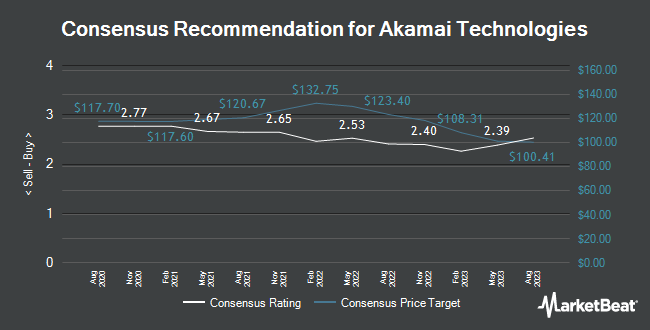