Wall Street analysts expect PetIQ Inc (NASDAQ:PETQ) to report $168.90 million in sales for the current quarter, according to Zacks Investment Research. Five analysts have issued estimates for PetIQ’s earnings, with the lowest sales estimate coming in at $165.51 million and the highest estimate coming in at $171.30 million. PetIQ posted sales of $186.03 million in the same quarter last year, which would indicate a negative year over year growth rate of 9.2%. The company is scheduled to issue its next quarterly earnings report on Thursday, November 5th.

According to Zacks, analysts expect that PetIQ will report full-year sales of $789.73 million for the current year, with estimates ranging from $781.70 million to $798.90 million. For the next fiscal year, analysts anticipate that the business will post sales of $917.95 million, with estimates ranging from $889.30 million to $978.43 million. Zacks’ sales averages are an average based on a survey of sell-side research firms that that provide coverage for PetIQ.

PetIQ (NASDAQ:PETQ) last released its earnings results on Thursday, August 6th. The company reported $0.70 EPS for the quarter, topping the Thomson Reuters’ consensus estimate of $0.44 by $0.26. The firm had revenue of $266.98 million during the quarter, compared to analysts’ expectations of $251.20 million. PetIQ had a negative net margin of 2.63% and a positive return on equity of 8.52%.

PetIQ, Inc operates as a pet health and wellness company. It operates through two segments, Products and Services. It manufactures and distributes veterinarian services and veterinarian-grade pet products, including prescription (Rx) medications, over-the-counter (OTC) flea and tick preventatives, and health and wellness products for dogs and cats. 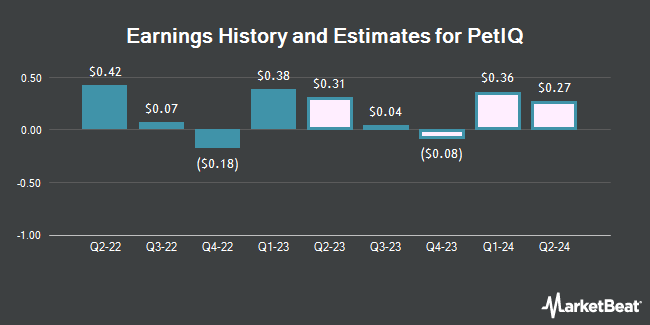 Receive News & Ratings for PetIQ Daily - Enter your email address below to receive a concise daily summary of the latest news and analysts' ratings for PetIQ and related companies with MarketBeat.com's FREE daily email newsletter.